From its inception, through the endoscopic aspect of its interventions, urology has been a specialty at the forefront of minimally invasive surgery.

Robotics in urology: the history
From its inception, through the endoscopic aspect of its interventions, urology has been a specialty at the forefront of minimally invasive surgery. With the advent of laparoscopy, urologists have been inventive in applying this technique to more complex operations. So well that in 1991, the first laparoscopic radical prostatectomy was performed in the USA by W.W. Schuessler.

But due to the numerous technical difficulties and endless operative times, these early prostatectomies were only briefly successful. In addition, being long and complex, training could only be carried out by tutors demonstrating good companionship. It was not until 1998 that this technology gained acclaim under the impetus of European teams.

The Clinique Générale-Beaulieu: part of the pioneers
In March 1999 in Geneva, Dr. Charles-Henry Rochat performed the first laparoscopic prostatectomy in Switzerland, under the mentorship of Dr. Richard Gaston from Bordeaux and Dr. Pierre Dubernard from Lyon. The main difficulties with this intervention were the exposure in a restricted operating field, the need to preserve the neurovascular and sphincter structures but particularly, the vesicourethral anastomosis that occurred at the end, a difficult time when the surgeon is most tired. This operating sequence is also found in laparoscopic correction of ureteropelvic junction (UPJ) obstruction or in partial nephrectomies for cancers that also require sutures at the end of the procedure. With experience, technical difficulties were put into perspective and Dr. Rochat’s team’s operating times have been considerably reduced, attaining the highest levels of expertise.

Computer-assisted surgery
At the dawn of the year 2000, computer-assisted surgery made its appearance. This allowed to remotely control micro-manipulators with 3D vision. The improved vision and accuracy were an advantage in the evolution of minimally invasive surgery. In May 2000, the first robot-assisted laparoscopic prostatectomy was performed in Germany by J. Binder. In Switzerland, the first da Vinci robot was installed in Zurich in August 2002, and in Geneva at the Clinique Générale-Beaulieu in January 2003, primarily for  Dr. Rochat’s urology program. As of 2015, more than 22 centres in Switzerland have been equipped with this type of robot.

The main advantages
Even though the advantages of computer-assisted surgery are evident for most laparoscopic procedures in urology, it is predominantly used for radical prostatectomy. The exceptional 3D vision, the ease of access to the lower pelvis, the ergonomic position for the operator, the precision of the surgical gesture by suppression of tremor, the reduction of movement and rotation of the instruments on 6 axes, all provide an incomparable ease of operation. However, the accomplishment of high quality operations requires great experience and consistency to cope with all situations.

A certified training center
The robotic section of the European Association of Urology (ERUS-EAU) has recognised the Clinique Générale-Beaulieu as a training centre for established urologists wishing to accomplish a full curriculum in robotics, in collaboration with the ORSI (OLV Robotic Surgery Institute), in Aalast, Belgium (Prof. A. Mottrie). The requirements of this type of Centre are based on a solid, scientific contribution to oncological robotic urology, the quality of teams and a high-volume of operations, with more than 100 prostatectomies per year. 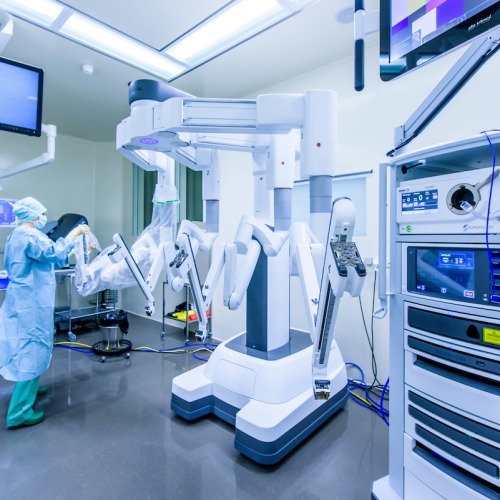